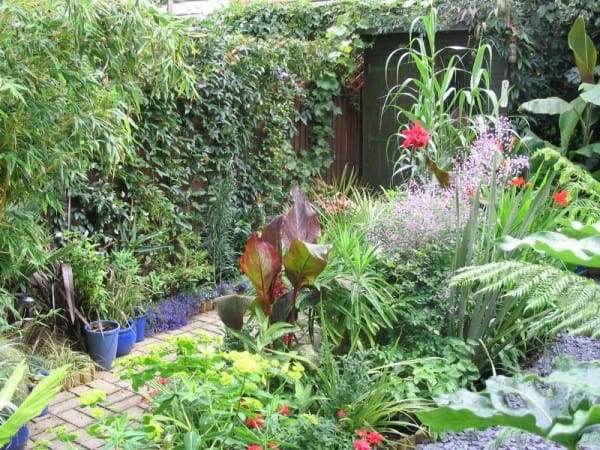 This urban garden transformation was the first gardening I ever did. The garden was in Tooting in South London and was about 9 metres long by 5 metres wide.

Although it contained a fair bit of rubble that I had to dig out, the soil was a surprisingly good loam, except in one corner where the London clay was only just below the surface.

I’ve described the creation of this garden as follows:

“I came to gardening quite late in life. As a child all I remember doing was playing sport. As an adult, in my twenties and thirties, I can’t really recall going outside much at all, except to get to the pubs, clubs, bars and restaurants I spent all my spare time (and money) in. But around the time I turned forty, it suddenly occurred to me that I could do something with the space attached to the back of my house, other than smoke in it. So, I made a quite deliberate decision to start gardening. For me, that meant learning everything I could about gardening in as short a space of time as possible – my bookshelves still creak under the weight of the countless gardening books I bought at that time.”

The garden featured here was the ‘space attached to the back of my house’. I’d renovated the inside of the house and decided to tackle the outside.

As you’ll see, there aren’t many ‘before’ or ‘during’ pictures, as I didn’t even have a proper digital camera then.

The ‘before’ shots actually show my earliest gardening efforts. The real ‘before’ shots, if they existed, would have shown a bare patch of dirt overshadowed by an out of control buddleia, surrounded by weeds.

When I first came to work on this garden, knowing nothing of gardening, I assumed that a small garden like this needed a tidy patch of lawn and some neat borders with some compact plants. And that’s what I started to create.

Before long, however, my reading led me to understand that:

With those principles in mind, I set to work. I was heavily influenced (still am) by Christopher Lloyd and Great Dixter, by various gardens I visited in Cornwall, like Trebah, by Will Giles’ exotic garden and, in a great flush of enthusiasm, by almost everything garden related that I read and saw.

So, whilst I started attempting to create an urban exotic garden, I threw in a few random bulbs and perennials, like Thalictrums, along the way that wouldn’t have been out of place in one of Miss Jekyll’s creations.

Click on the first pic below and use the arrows to scroll through.

The urban garden transformation in pictures

The next garden step

It was after gardening here for a couple of years that I I felt the need for more space to garden in, hence my move to the suburbs.

Join Us! Subscribe to the Gardening Step by Step NewsletterSign up below to receive the latest gardening tips and updates*

7 thoughts on “Urban garden transformation: small space, big plants … and lots of them”