Dahlia pinnata is in the Asteraceae (or Daisy) family.

Varies according to cultivar.

Tender, but may be hardy down to -5 degrees C (41 degrees F) if not waterlogged and well mulched.

Dahlia pinnata along with Dahlia imperialis, is one of the two original varieties of dahlia that were described by Francisco Hernandez, physician to King Philip II of Spain, when he visited Mexico in the 16th Century.

Dahlias (as we know them) had been cultivated in Mexico for centuries – Dahlia tubers had been used as a food source and the long canes of the Dahlia Imperialis (the tree dahlia), had been used to carry water. In fact one of the names used by indigenous peoples for the plant, Cocoxochitl, means “water pipe plant.”

It was not until 1789, (whilst revolution raged in France), that Abbe Antonio Jose Cavanilles, Director of Madrid’s Royal Gardens, raised dahlia plants in Europe for the first time. Based on material sent to him from Mexico, Cavanilles cultivated Dahlia pinnata and Dahlia rosea. He named them dahlia, after the Swedish Botanist and student of Linnaeus, Anders Dahl.

Seeds and tubers of these attractive new plants quickly found their way around the horticulturalists of Europe and it soon became apparent that Dahlias were quick to hybridise, leading to much confusion and debate amongst botanists even to this day as to the true classification of the genus dahlia and its multitude of species and hybrids.

Today, there are approximately 30 Dahlia species and perhaps 20,000 cultivars. However, it is reasonably widely accepted that it is from Dahlia pinnata and Dahlia coccinea that today’s garden varieties of Dahlia are derived.

Today’s Dahlias come in virtually every colour except blue and black and in a wide range of sizes from the tiny Lilliput Dahlias to small pompon dahlias, to giants, with blooms over a foot (30cm) wide.

Check out the other Dahlia posts below Taking care of dahlias: the trick with deadheading 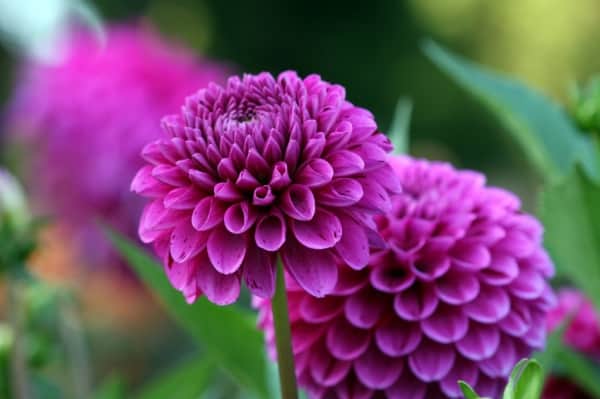 How to grow dahlias: the complete guide to dahlia care

Before we think about how to grow dahlias, we might ask ourselves why should we… All you need to know about dahlia tubers and dahlia bulbs

Dahlia tubers Let’s start by clarifying the slightly misleading headline to this post and, in…

Dahlia varieties: your complete guide to all types of dahlias

Classification of types of dahlias (or varieties) is a fluid subject. Botanists argue about the… 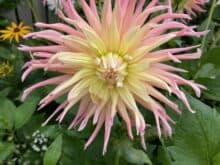 Dahlias in my garden: Six on Saturday